The article written by the chief of the Indonesian Military’s Peacekeeping Center, I Gede Sumertha KY, which was printed in The Jakarta Post on Tuesday, July 12, is intriguing, if not discouraging to women in Indonesia’s armed forces.

In his article, Sumertha stated that: “The TNI [Indonesian Military] has attempted to meet the number of women personnel in its UN peacekeeping missions as regulated by the UN at a maximum of 10 percent of a total contingent. But, in practice, it has never been fulfilled because of two reasons: First, many women candidates have failed in the recruitment process because of minimal English skills and second, many of them are married and cannot get their husbands’ permission to join in a UN peacekeeping operation.”

What is striking is that the article showed women gaining roles in the international peace and security sector, while the same consideration does not occur at home. The reasons, as stated by Sumertha, are because women in Indonesia’s military lack education and are still constrained by men (their husbands) in decision making.

Sumertha says that TNI women have poor language skills compared with their male colleagues, which then raises the question about equal access to knowledge in the corps. We should now ask the following questions: How open is the military academy and other military higher education facilities to women? Are there incentives that encourage women in the military to improve themselves? Because, if a woman sees that her hard work will not bring merit, especially when compared to her male cohorts in terms of salary or acknowledgement, her motivation to excel will diminish.

Until now, women in the TNI are not allowed to assume direct combat positions, and if they are married to men in the forces, their promotion proceeds only after their husbands win promotion. It is common practice that a military woman’s rank cannot exceed her husband’s for the sake of “pride and morality”. Therefore, the problem identified by Sumertha lies not in the women per se, but within the military’s institutional management.

The other issue is the fact that women in the military are deemed inferior to men in decision making. This raises several questions as to whether Indonesia’s military women are allowed to make autonomous decisions by themselves, or whether they have to wait until their male counterparts decide for them. This symptom mirrors women in society where they face difficulties in asserting their aspirations in the domestic realm, professional world and politics.

One says that when women go to work and do not attend to the household, the child-raising will be chaotic, which in turn will create a poor future for the nation. This opinion reflects Indonesian society’s tendency to deem domestic responsibilities and child-care solely as a woman’s obligation, without men assuming equal responsibility. Without equal education and decision-making abilities, this situation will not change anytime soon.

Indonesia has a rich history of women fighting side-by-side with men in the war for independence, prior to 1945. Women such as, Marta Christina Tiahahu, who is known for capturing Beverwijk Fortress in Maluku; Nyi Ageng Serang, who led a battalion in Java to fight in the Diponegoro War in Central Java; and Cut Nyak Dien, who led guerilla troops in Aceh.

Nevertheless, after Indonesia’s independence, women started to lose their foothold in the military. General Ali Murtopo, a high-ranking military figure in the 1970s, was even quoted as saying, “…in Indonesia … generally it is only men who work” (quoted in Angkatan Bersenjata, July 2, 1973).

The failing feminist struggle of Gerwani (Indonesian women’s movement), was one reason why women started to lose their voice in the public sphere and retreated to domestic work. Their struggle was cut short by Soeharto’s New Order regime because it was perceived as being aligned to the Indonesia Communist Party. The regime limited women’s empowerment concerning their demands regarding anti-polygamy and family planning.

Since the reform movement in 1998, the situation should ideally be changing for the betterment of Indonesian women, including women in the armed forces. Nevertheless, progress is slow. Former president Abdurrahman Wahid issued a Presidential Instruction on Gender Mainstreaming in National Development (Inpres No.9/2000), but there has not yet been a significant policy change in the TNI to improve women’s participation, either in quality or in quantity. From the military’s latest data, women account for around 10-15 percent of TNI personnel. 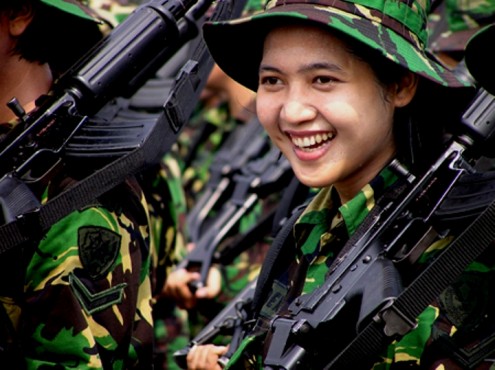 Sumertha’s article begs the question, whether the Indonesian Military truly encourages its women to join UN peacekeeping missions? If the answer is yes, then what efforts have Indonesia’s armed forces made in lifting the impediment faced by women?

The military should give an explanation of the measures that have been taken. Such as, how many women are trained for missions? And, whether there is any provision of gender training to encourage men to accept women in the military as fellow soldiers, and not only as clerical assistants or logistics support? Lastly, give women the support to be heard, to make decisions and to participate in keeping the world’s peace.