On Sunday, 20 May 2012, Timor Leste will celebrate 10th anniversary of independence. The country parted from Indonesia in 1999 and nursed under UN transitional administration for three years before it started to self-govern. This upcoming celebration will also act as inauguration for the country’s newly elected President José Maria Vasconcelos, popularly known as Taur Matan Ruak or “two sharp eyes” in Tetun language. Attending the event will be Indonesia’s President Susilo Bambang Yudhono, Portugal’s President Anibal Cavaco, and former Secretary General Kofi Annan. This list of international representations to participate in the country’s anniversary proves that Timor Leste has been successful to build itself and obtain global recognition.

In the occasion of the incumbent President José Ramos Horta visit to Singapore earlier this month, he elucidated what his country had achieved so far. President Horta first comment was about economy, on how the country struggle after UN transitional administration concluded its mission in 2002 and left the country to survive its own. Depleted of UN budget, with no job creation and almost nonexistence GDP, Timor Leste was able to round merely 68 million US$ for the year budget to support 1.1 million people. “There were even medium-scale companies that have annual budget more than us. It is unbelievably small for a country to subsist, but we made do”, said President Horta. 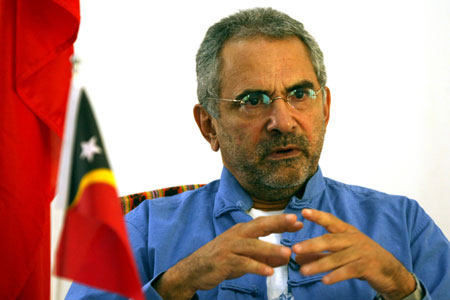 The raising price of fuel-commodities helped them to survive, as oil and natural gas are Timor Leste’s top money-maker. After almost a decade, the country last year actual budget reached 1.1 billion US$. Nevertheless Timor Leste, just like Indonesia, has been called as country with rampant corruption and the government tries hard to tackle it.

The country established Sub-Commission on Corruption in its parliament and Anti-Corruption Commission in its government in 2009. Two years later Timor Leste launched Budget Transparency website (http://budgettransparency.gov.tl) where people can observe daily updates on government spending, to the extend seeing which companies won the public sector tenders. Layers of oversight seemed effective to boost corruption-eradication and good governance. Clean and good governance are especially important for developing countries to avoid drained resources due to mismanagement and fraud that for example Indonesian state own companies Pertamina and Bulog experienced in the 1970s.

The second remark of President Horta was on 2006 East Timor crisis as he said, “the common problem of natural-resource rich states have is conflict”. At that time the country military experienced internal tension that led to coup and assassination attempts of East Timor president and prime minister. As many as 37 people died and 100,000 others displaced due to this crisis.

The UN, Australia, Malaysia, New Zealand and Portugal responded to the crisis by sending their military in attempt to help stabilised the country. The former controller and direct neighbouring country Indonesia, however, did not send its troops to help Timor Leste but its security forces gave Horta their commitments to guard border areas and not to further complicate the issue. This support rewarded in April 2012 when Timor Leste bestowed solidarity medals to four Indonesian military and police officers working in West Timor (Nusa Tenggara Timur) province.

Now the country is said to be in stable condition despite there are still more than 1,200 uniformed personnel of UN Integrated Mission in Timor Leste (UNMIT) keeping their guard. UNMIT will withdraw its personnel by the end of this year if the upcoming July parliamentary election runs well and the elected parliament successfully appoints prime minister for the new round.

Despite Timor Leste’s dim past, President Horta still convinced that his country had made significant progress. Timor Leste recently welcomed its first batch of 500 graduating medical doctors from the country collaboration with Cuba. This number will rise to 700 in the coming year. The number of children enrolling to primary school marks high at 75 percent for boys and 73 percent for girls, this hopefully will be able to elevate the country’s 50 percent literacy rate.

The most applauded achievement of Timor Leste is the support given to women for their public roles. Literacy between girls and boys is almost equal (93 percent in UN Women survey, 2007) and one in three students in higher education is female. Electoral Law issued in 2006 obliges every political party to support one woman in every four candidates. The result can be seen in Timor Leste current parliament where women obtain 19 seats out of a total 65 seats, measuring almost 30 percent of the representatives. This percentage ranked number 22 in world’s percentage of women parliamentarian and number two in Asia (Inter-Parliamentary Union review per March 2012). The Law Against Domestic Violence was adopted by Timor Leste in 2009. With this golden achievement in gender field it is no wonder that the country won global votes for being UN Women governing board.

The country’s Human Development Index ranked 147 out of 187 countries (UNDP, 2011), gaining 0.495 score. This is still below East Asia and Pacific average of 0.671 but it is above Myanmar (0.483). According to World Bank recent statistic, Timor Leste’s GDP grew in average 5.9 percent for the last five years, this is higher than Indonesia (5.7 percent), Malaysia (4.5 percent) and Thailand (3.6 percent). Provided the country could maintain its progress in a positive manner, there should be no reason for Southeast Asia regional organisation ASEAN to decline Timor Leste membership application.

The author is an Associate Research Fellow at the S. Rajaratnam School of International Studies, Nanyang Technological University, Singapore.