Early this week, the Stockholm International Peace Research Institute (SIPRI) published its Top 100 list of arms-producing companies in the world. The report shows an international decline of weapons sales for the first time since the 9/11 tragedy, based on year-to-year comparisons.

Arms sales reached a total of US$410 billion in 2011, 5 percent lower than the year before. Reasons for this sales decrease include the austerity measures implemented in North America and Western European countries, which significantly cut many countries’ defense spending; the withdrawal of coalition forces from Iraq and Afghanistan; and the United Nations Security Council’s sanctions on Libya.

Last year, Indonesia issued Law No. 16/2012 on the defense industry that aims to revitalize local strategic companies to be able to compete with international companies’ sales. How local companies react in the face of the declining arms procurement remains to be seen when even established global sellers struggle to make it work, especially when calls that Indonesian defense actors buy locally produced arms remain
neglected. 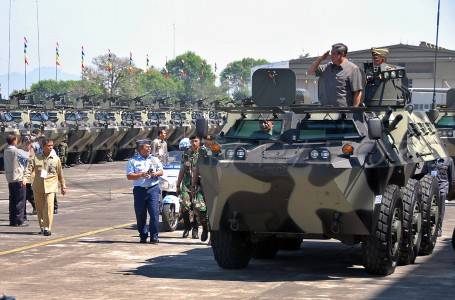 Of course, we have to appreciate the law for its strong spirit to improve our defense industries and also to meet the need of main weaponry-system procurement. This spirit is reflected in some paragraphs that clearly refer to local content, countertrade and offset (article 43 paragraph 5), and show a preference for domestic arms products (article 43 paragraph 1).

However, this law still has some problems. First, the existing ambiguity in regulating the development of our defense industries. On the one hand, the government (read: security actors) is encouraged to buy
and use domestic arms products. But, on the other hand, this law does not give any sanctions to users if they buy weapons from foreign countries.

Actually, when the House of Representatives deliberated this law, sanctions against negligence were among the hot topics discussed. Some parties forcefully asked that sanctions be imposed on users who refuse to buy domestic products. Some parties, including the government, opposed the idea. Unfortunately, after much lobbying the House and the government agreed to drop that clause.

Third, the transitional period for industries to restructure and improve their financial performance within two years will also trigger problems. Two years is not enough for industries to make their business “healthier” and better.

Since the law has been enacted, there has been no significant progress reported. It is difficult to see how Indonesian defense producers can catch up with the technology, although the law regulates on strategic countertrade, joint-collaboration and offset for every weapon system procured abroad.

These strategies will be used to gain technological leverage that the country is still lacking. However, the catch with this law is that Indonesia should buy in bulk or buy more expensive arms to demand producers share their technological advantage. Even then the producers are only willing to share limited information on low-tech and high-manual work, but not the core component that Indonesia can sustainably base its strategic industry on.

Referring to the offset scheme stipulated in this law, we are projected to have strong defense industries that could produce our main weaponry system independently by 2049. This is such a good dream. But, it needs the government’s consistency and political will to support and involve our defense industry in any arms purchasing.

In fact, it does not happen. When President Susilo Bambang Yudhoyono visited the United Kingdom last year, the government agreed to purchase sniper rifles from there.

However, PT Pindad will not be able to completely produce that kind of weapon as it will still need to import rifle scope parts. If the government has a strong commitment to improve the capacity of PT Pindad, President Yudhoyono should have developed cooperation in making scopes for sniper rifles in Indonesia. 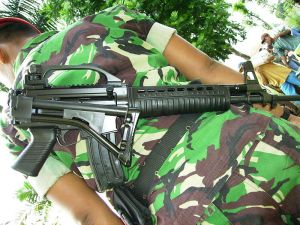 In the eyes of the skeptics, Indonesia’s law on the defense industry is only a facade to increase arms procurements and thus, open more probabilities for persons-in-charge to tap into the commission, rather than genuinely supporting local strategic chains.

However, several defense experts also think that Indonesian rusty fleets are in need of rejuvenation (Connie Bakrie 2009, Andi Widjajanto, 2012) and “buying the technology before producing” is commonly practiced by countries having defense companies listed in the Top 100, including South Korea and India.

If not collaborating with the established strategic industries, Indonesia has the option to go it alone, like North Korea, with a very slim chance to succeed. Consequently, defenders of foreign purchase are persuasively pushing their agenda by luring technology transfer through offset. If the integrity of Indonesian defense procurers and their negotiation skills are guaranteed, the country might gain more from the scaling down of the arms market. The producers are desperate for buyers and the SIPRI report also mentioned that these companies pursue future opportunities in Latin America, the Middle East and Asia.

There are four keys to secure foreign arms procurement that will benefit Indonesia in the long run. First, it needs to be wary of procuring weapon systems that are obsolete, incompatible and unsuitable with Indonesia’s existing fleet, terrains or perceived threats only because they are cheap or filling the pockets of the elites.

Second, the country’s strategic industries should look at cyber-security as an emerging market. The field is gaining popularity as data protection, network software and simulation test programs play more important roles in contemporary state defense. Entry to this market is relatively less expensive in contrast to building hardware kits such as main-battle tank or fighter plane as intelligence is the essence.

Third, to boost production, industries really need routine long-term contracts with simple administration processes from the government. This action should be followed by a commitment and willingness of the Indonesian banking sector to fund the contract.

Lastly, Indonesia needs to develop its local value chains to supply big strategic industries such as PT DI, PT PAL, PT Pindad and so on. Without it, the growth of these companies will be hampered by high import costs as they cannot obtain the materials domestically. The same advancement on our human resources — via appropriate skills training — also needs to be pursued. No doubt, on the intelligence level, Indonesia is ready to compete.