By Yoes C. Kenawas and Fitriani

Indonesian political parties have just submitted their lists of candidates for the next legislative election to the General Elections Commission (KPU). Celebrities, incumbent legislators, ministers and family members crowd the lists. How will this phenomenon affect democratic competition and consolidation, as well as women’s agenda after 2014?
Commentary
Indonesian political parties have just submitted their lists of legislative candidates for the 2014 General Election. Some names in the lists are familiar to the Indonesian electorate because of their backgrounds. Among them are 10 current Cabinet Ministers, 51 celebrities including models, singers and TV-personalities. More importantly, the lists also portray the prevalence of political dynasties in Indonesia, including 15 relatives of President Susilo Bambang Yudhoyono, wives of Minister of Religious Affairs and Minister of Cooperative and Small Medium Entreprises, and four of dangdut singer Rhoma Irama’s family members. It strengthens the impression that Indonesia’s politics is personalized politics, dominated by old power, fame, money and family network; rather than valuing capability, experience and merits.

Finding the Root Causes
There are three reasons for this phenomenon: weak implementation of rule of law, “idol syndrome” or personalistic voting behavior, and weak party institutionalisation. Firstly, the Indonesian electoral law is always changing from one election to the other based on the interests of politicians rather than seeking to contribute to the maturity of the country’s democracy. That is one of the reasons why after 15 years of Reformasi, Indonesia is still in democratic consolidation phase. More importantly, weak implementation of rule of law enables the politicians to exploit loopholes for their political interests. 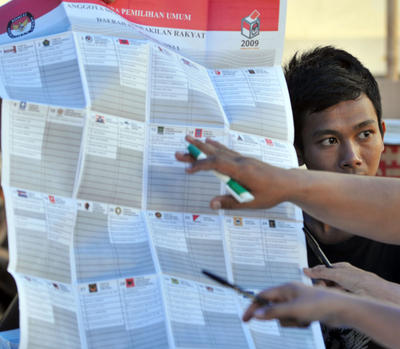 Secondly, the changing voting behavior of the Indonesian electorate from aliran-based – where the ideology and party platforms were important – to a more personality-based or so-called ‘idol syndrome’ has also contributed to the problem. Liddle and Mujani argue that the Indonesian electorate is more concerned with the individual figure rather than party ideology or platform. That is why celebrities, TV personalities and members of political dynasties have a bigger chance to be elected because they have a high level of popularity. Regular appearance in the media is also providing comparative advantage to win votes. Given the consideration of winning the vote through popularity, political parties have decided to support celebrities, incumbents and family members of established politicians.

Making Politics More Gender Inclusive?
The rising popular culture is said to be more welcoming to women as it paved the way for them to enter politics, hitherto seen as a male dominated arena. Popularism is also seen as the answer to political parties’ problems in fulfilling the quota of 30 percent women candidates as required by the electoral law. Especially for women, celebrity and family-network politics is considered beneficial as they are based on their showing in the media rather than building actual public achievement.

Does this mean the 30 percent threshold of gender inclusiveness can be easier to achieve if celebrity and kinship politics is embraced? If one only measures quantity, then the answer is yes, they are effective tools to bring more women to the parliament. In the 2009 election, the country reached its highest women representation in parliament with about 18 percent of the total members of parliament as well as having the highest ever number of celebrity parliamentarians. Currently, 23 of 51 celebrity candidates (45 percent) and five out of 15 candidates that are said to be related to President Yudhoyono (33 percent) are female. Indeed this is beneficial to fulfil the gender inclusiveness quota.

However, if one measures the quality of gender inclusiveness, this strategy does not guarantee that the female legislators will support women’s agenda such as gender-sensitive budgeting, violence against women, maternal health support or specific issues faced by female migrant workers, in the parliament. Of course, it is an oversimplification to say that female legislators are just a decoration to the male dominated parliament, because there are female legislators who really fight for women’s rights in the parliament. Nevertheless, it is also safe to say without proper selection and promotion mechanism by the political parties, Indonesia might see another Angelina Sondakh, the Democratic Party legislator who was involved in a corruption case or Ratu Munawaroh, wife of the Jambi Governor who was replaced because she never attend a single meeting of parliament.

Alternative Solution: Creating Meritocracy
With those problems, political parties should not simply resort to short-term solutions to retain their power. Instead they should be more long-term oriented and positively contributing to the democratic consolidation process. The most often recited advice given to political parties is to enforce recruitment and regeneration systems. Political parties should scout for members and give training for their members rather than pick popular personalities that have no clear competence, track-record and commitment to their parties. Ignoring this will result in degrading the quality of parliament, making them good media personalities but inefficient legislators.

One way for political parties to find better candidates, rather than hand-me-down kin is to open their recruitment to the public and be transparent in the selection process By the same account, the parties should publish the background of their candidates so that the public can fairly assess them to choose their future legislators based on capabilities and track-records. It will also restore the image of political parties as a people’s voice aggregator. Finally, Indonesia must strengthen and improve the quality of the KPU and other related institutions in implementing the electoral law and avoid politicizing those institutions. Additionally, the role of the media and civil society is also important to monitor the political parties and election management bodies. Only with these efforts will Indonesia have a credible election, which will amplify the international confidence in Indonesia to be a country that values what people know rather than who they know.

Republished in Straits Times (Singapore) with minor edit with title “Plenty of Celebrity, Lack of Credibility”, 10 May 2013 http://www.straitstimes.com/the-big-story/asia-report/opinion/story/plenty-celebrities-lack-credibility-20130510

Republished in East Asia Forum with minor edit, 31 May 2013 http://www.eastasiaforum.org/2013/05/31/indonesias-next-parliament-celebrities-incumbents-and-dynastic-members/