Recently, Indonesian Military (TNI) Commander Gen. Moeldoko stated that “democratic transition should be concluded this year” as Indonesia had yet to achieve political stability.

The commander’s responsibility is to ensure that national defense is in top-notch condition and to oversee internal military institutional reform. Does his statement mean he is eyeing a political position beyond his current defense role? Does his reference to the protracted transition and yearning for stability mean he subscribes to the New Order fixation, which insinuates that civilians are not ready to lead the country and that the military should lend a hand again?

One analyst has suggested moving from questioning security sector reform to security sector “transformation”, arguing that the focus should change from making the military accountable for its conduct to arming the TNI with the latest weaponry Indonesia can afford, especially with the regional turmoil over the South China Sea.

Others similarly view that Indonesia’s military reform has been completed successfully. Such complacency has led to unsuccessful reform issues being swept under the rug.

Yes, there have been huge improvements within the TNI since the end of the New Order. The dwifungsi (dual role in defense and civilian life) has been removed, no military member obtains a free seat in the legislature, business units have been restructured from the corps to being under the Defense Ministry or State-Owned Enterprises Ministry, and the police are no longer part of the military.

Yet we should also remember the shortcomings of military reform.

First, reform is incomplete regarding the military’s respect for human rights. In 2000, the TNI published a Soldiers’ Guideline for Human Rights Implementation.

However, there is no guarantee that soldiers will behave according to the guidelines, as long as there is no commitment of the institution’s willingness to be bound by human rights standards.

It has been just a little over a year since the Cebongan attack in Sleman, Yogyakarta, when members of the Army’s Special Forces (Kopassus) raided a prison, killing an inmate who they said was a thug who killed a colleague.

This incident ruined the decade-old image of fairly successful TNI reform as its weapons storage was compromised and the soldiers involved did not show any respect for human rights, nor for international norms respecting civil-military relations, as stipulated in the 1949 Geneva Convention.

The attack occurred in an area relatively accessible for the media; pressure instantly mounted for an investigation and an open trial for the suspects.

But what would have happened if this incident had taken place somewhere in Papua, with limited media access? What would happen if journalists themselves were the victims, like the “Balibo Five” in former East Timor?

In 2012 alone, the independent Commission for Missing Persons and Victims of Violence (Kontras) recorded more than 90 cases of violence involving military members, including maltreatment (55 cases), destruction (10) and shooting (four cases). As these violations were not widely reported, the public has no idea whether the TNI addressed the cases internally, or whether it turned a blind eye due to a lack of internal accountability supervision.

This condition leads to the second shortcoming in military reform: the sluggish progress regarding military tribunals. The open tribunal on the Cebongan attack, held after mounting public pressure, was a rare event. The legislature has been debating revisions to the Military Tribunal Law since 2004. The bill stipulates that military personnel suspected of criminal acts will be brought before a civil court, rather than a military tribunal, as the latter usually gives administrative penalties rather than penalties aimed at deterrence.

Analyst Wahyudi Djafar has noted that even if accused military personnel were to be brought before a military tribunal, the tribunal should adhere to principles such as transparency and accountability, besides handing out punishment befitting the crime. Apparently, these requirements have become major obstacles to the amendment of the Military Tribunal Law. 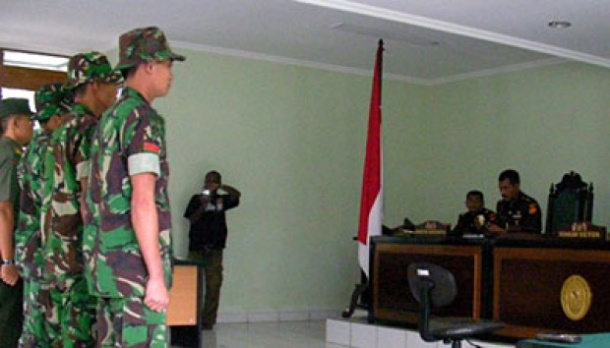 The pattern is similar to the tribunal of Kopassus members found guilty of abduction and forced disappearance of student activists in 1998; perpetrators were brought to court, but the one giving the assignment is still protected by law.

The third issue is the untouched territorial commands (Koter) at the local level, which were used by the New Order to spy on and influence the population. There is no reason for the military to persist having operations in the local areas, as it should focus on being the first line of defense against outside threats in the frontier areas.

Because military personnel are still deployed at the local level, the Koter will always be suspected as effective political tools, for instance to conduct voter mobilization and intimidation around each election time. Hence, Koter needs to be reformed, or else military personnel or retired officers might use its network to gain political support up to the local district.

Returning to Gen. Moeldoko’s wish of the conclusion to democratic transition to make way for political stability, it is not his position to provide such a statement.

Unless he is subtly hinting an underlying motive that he is ready to leave his military throne to join politicians and the business crowd — just like several former generals leading political parties and several others taking commissioner positions in state owned enterprises.

Fitri Bintang Timur is a researcher at the Institute for Defense Security and Peace Studies and a Fellow of Marthinus Academy, Jakarta. Puri Kencana Putri is a researcher at the independent Commission for Missing Persons and Victims of Violence (Kontras), and a graduate student of international law and human rights at the University for Peace, Costa Rica.