Many analysts have speculated about what will become of Indonesia after President Susilo Bambang Yudhoyono’s (SBY) leadership, whether the country will rise, sink or merely survive. Less talked about is what will become of SBY after his term as president ends.

The first option for SBY is to head an international organization. Leading a big archipelagic country for 10 years has given him rich experience on how to handle a large institution. 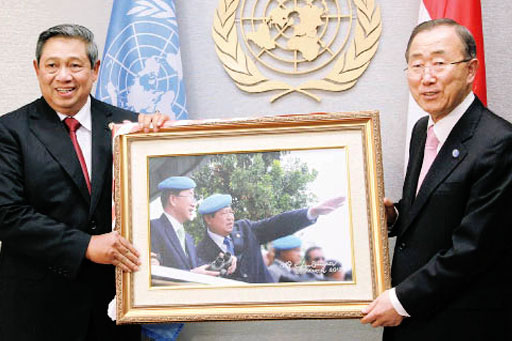 Arguably, the complexity of Indonesia, having nearly 300 ethnic groups and 750 local languages and dialects, is comparable with that of the UN or ASEAN. Thus, if he is keen, SBY could leap from the national spotlight into the international one.

Not many Indonesians have a global profile like SBY. He has garnered international attention for successfully organizing the Bali Climate Change Conference in 2007 and has received two awards from the UN: Leadership in Marine and Ocean Management and Global Champion for Disaster Risk Reduction.

President SBY also received the Gold Standard Award from Hong Kong-based Public Affairs Asia for being Asia’s top political communicator in 2010. Earlier this year, he received the World Statesman Award from the Appeal of Conscience Foundation in New York.

SBY, with his diplomatic tact and high proficiency in English, has also engaged actively on the UN Secretary General High-Level Panel of Eminent Persons on the post-2015 Development Agenda.

He was co-chair of the panel, along with Prime Minister David Cameron from the United Kingdom and President Ellen Johnson Sirleaf from Liberia.

The panel is tasked with creating a development framework to reach the Millennium Development Goals (MDGs), and the President’s leadership role in this effort bolstered Indonesia’s international reputation.

So far, Indonesia has made great strides in reaching the MGDs by reducing the number of people living in poverty — from 20.6 percent in 1990 to 11.9 percent in 2012 — providing universal elementary education for children and reducing infant mortality from 68 per 1,000 births in 1991 to 34 in 2007.

In the realm of peacekeeping, SBY was Indonesia’s chief military observer in Bosnia from 1995 to 1996. His understanding of the situation affirmed his support for the UN Peacekeeping Operation (UN PKO), with the goal of sending 10,000 Indonesians to serve in the international force, which would make Indonesia one of the 10 biggest contributors to the UN PKO, up from its current rank of 15th largest. Again, with SBY’s commitment, Indonesia gained international clout.

With a foreign policy vision of “zero enemies, a thousand friends”, the President has managed to build good bilateral relations with other countries.

Not least, he became an Honorary Companion of the Order of Australia in 2010 and was honored by Queen Elizabeth II in 2012 with the British Knights Grand Cross of the Order of the Bath for internationally respected diplomatic service. Not only close with foreign officials, SBY also maintains good relations with Indonesians people living overseas, as evidenced by his attendance at the Congress of Indonesian Diaspora, the biggest gathering of Indonesians living overseas, held recently in Jakarta.

Besides becoming an international player, the second option for SBY is to focus on developing his political party and shoring up his legacy as one of the founding fathers of Indonesian democracy. He is the first directly elected president of Indonesia.

The SBY era, so far, has not been tainted by any demands to become a lifetime president or purging of opposition parties. Admittedly, there are improvements that need to be made, but SBY still needs to be applauded for managing the heterogeneous society of Indonesia without any provincial secessions.

SBY is also a tactical politician with a heart. He was the initiator of the school operational assistance (BOS) program, which gives grants to lower school fees; the Community Health Insurance for the Poor (Askeskin), which enables the underprivileged to access healthcare; and the direct cash assistance scheme (BLT, now BLSM) to lessen lower the level of society’s burden in bearing the increased costs associated with the fuel price hike.

He won the heart of the people and was reelected in 2009. This political skill should be passed on to his successors, which could be done by ensuring the regeneration of the Democratic Party (PD). SBY can be a beneficial patron for the PD, as he is the party’s face and head. One day when Indonesians remember the good days under SBY, people will vote for PD.

The third option for SBY is to retire from politics and let the younger generation take over the task of nation-building. If he opts to do this, he would set an example for the older generations still vying for political power.

This path was taken by former South African president Nelson Mandela, who retired after serving for one term in 1999, readily handing over the country’s leadership to the next president. In his retirement, Mandela supported a foundation to deliver better healthcare, developed rural area and built schools. Mandela continued to work on the issues he didn’t complete during his presidency, only instead through non-governmental means.

If SBY retires from politics he could become a successful entrepreneur. With his vast network, he will be able to establish businesses that generate gross domestic product and employment.

This option will set an example, pushing Indonesians to become professionals rather than entering politics for profit that perpetuates corruption. As a leader, there is a great expectation for SBY to show his wisdom in choosing his future path.

Hopefully he will advance Indonesia’s development.