In the aftermath of unprecedented capital outflows in Indonesia linked to financial measures in the United States, 20,000 workers went on strike for minimum wage and threatened more. Is this surge of labour unrest a symptom of a much deeper labour quandary? 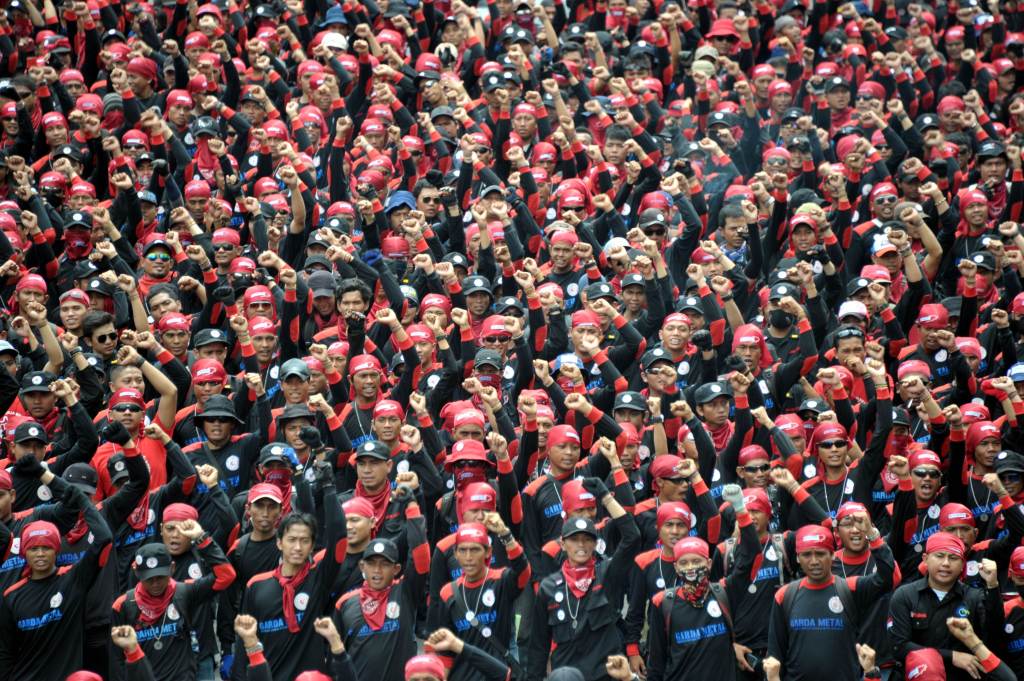 AS INFLATION rates continued to rise, the Indonesian rupiah plunged past the psychologically significant level of 11,000 per US dollar for the first time in four years. Workers in the greater Jakarta region were unmoved in their collective demands of a 68 per cent minimum wage hike from 2.2 million rupiah (S$264) to 3.7 million rupiah (S$410) monthly beginning in 2014.

The latest demands for wage increase came on the back of a 44 per cent payroll increment in November 2012 endorsed by popular Jakarta governor Joko Widodo from the previous 1.5 million rupiah (S$180) monthly. Jakarta authorities were equally adamant in not bowing down to the unions’ demands. Nonetheless, leaders from the Confederation of Indonesian Workers’ Union (Konfederasi Serikat Pekerja Seluruh Indonesia, KSPSI) were undeterred and threatened to stage more protests nationwide next month.

Labour-related demonstrations have become an endemic feature of the Indonesian landscape in recent years. In 2012 alone, according to Jakarta Police, the total number of labour-related protests reached 1,050 cases – a sharp increase of 16 per cent from 900 in 2011. Public demonstrations were by far the most preferred way for workers to voice their grievances and they come in many different forms. The Indonesia Media Monitoring Centre (IMMC) revealed that most of the labour protests were mobilised to obstruct usage of public facilities, primarily roads.

The second common method was demonstrating in front of government buildings and offices, followed by other mass actions (or aksi massa) such as staging peaceful rallies, instigating riots, performing “sweeping” actions and going on strikes by stopping work altogether.

These demonstrations are not always disruptive, although they are a cause for concern among several multi-national corporations. A Korean Garment Group subsidiary, PT Doosan Cipta Busana Jaya, for example claimed to have accumulated over two billion rupiah (S$240,000) losses for two days of strike earlier in March 2013. The MNC is currently seeking legal charges against two trade unionists suspected of conspiracy.

Research by the Centre for Strategic International Studies (CSIS) shows that minimum wages across Indonesia experienced an acute rise of 30 per cent for the years 2010-2013. This sharp increase was ranked highest in the region when compared with Thailand (14 per cent), China (eight per cent), Vietnam (6.7 per cent), Cambodia (five per cent), Malaysia (three per cent) and the Philippines (three per cent). Productivity on the other hand, did not register a similar surge.

The slippery slope of wage hikes

The Indonesian government had been generous to some of these demands during better times. In December 2012, President Susilo Bambang Yudhoyono characteristically declared the end of the era of “cheap labour”, highlighting labour welfare as the government’s chief imperative. At the same time, the government was also cautious of the over-reaching effects of perennial minimum wage hikes. Nonetheless, the government followed up with its promises for major labour reforms, although a special task force was also commissioned to monitor these employment developments.

General wage levels throughout the provinces did subsequently rise despite protests from employer groups. Labour reforms were raised as the unified and increasingly vocal union movement stepped up pressure – even as its demands over labour laws and wage differentials were being met.

Nonetheless, within the current dismal economic climate, politicians had found a good reason to justify their reservations of a hefty wage hike. For the time being, collective bargaining in Indonesia has been halted.

The unresolved quandary of an imminent wage rise will likely resurface in the months to come. As a precautionary note, the International Monetary Fund (IMF) had warned of the need to liberalise rigid labour markets to guard against the growing likelihood of asset bubbles. While Indonesia may not go down the path of greater liberalisation, it is wary of the scourge of its own “middle income trap”.

As Indonesia seeks to create a skilled labour force to avoid the income trap, it is realising that merely raising real wages is but a sisyphean endeavour without the corresponding investment in technology, education and infrastructure in the long run.

Meanwhile, Indonesia still has a long way to go in its existing obligations to its workers. Labour regulations are often bypassed indiscriminately while attempts at eliminating unscrupulous behaviour and unfair severance take a backseat due to the lack of transparency. As it is undoubtedly a combustible fuel for unions to press for higher demands, it is timely for the government to put a brake on its populist response to wage hikes.